One of the most interesting forms of lay organization is the cofradía, i.e. confraternity or brotherhood. These are especially popular in Western El Salvador, and seem to have been around since the beginning of the Spanish conquest.

Izalco, in Western El Salvador, is home to a remarkable range and variety of Cofradías, lay confraternities that help define Catholic life in the city. Each cofradía serves as custodian of a number of religious statues throughout the year, and sponsors at least one annual feast.

The Nativity cofradía, the Niño Dios de María, and the Holy Week confraternity, Hermandad de Jesús Nazareno, both newer confraternities, do break from this pattern a bit, and seem more “ladino,” i.e. European and middle-class. Leaders and members of all the cofradías point out social class and racial differences between these and the other confraternities. Even the Nativity and Holy Week celebrations have elements that make them stand out from other festivals in the Catholic world.

Whereas confraternities in some countries are organized around a charitable purpose – service to the poor, widows, or orphans – members describe the purpose of their cofradías in terms community, memory, honoring the ways of the ancestors, and of course, honoring the saint. They do not expect that participation in festivities will have an ethical, educational purpose beyond that.

Each cofradía is autonomous and is led by one or two majordomos or majordomas, men and women recognized as leaders in the community, who sign a contract to serve as custodians of the statues and symbols of the cofradía in their homes. Cofradía members often suggest that their leadership is a continuation of indigenous leadership patterns, and see the cofradías as a broader form of social organization and hierarchy that is relevant to the whole community, not simply the Catholics there. Participation in the feasts is not limited to Catholics, but feasts are conducted in cooperation with the parish and often include a Mass. Cofradías welcome men and women, and usually assign different roles to each gender.

Each cofradía raises funds through offerings to the saints, and uses the funds to care for the statues and to provide food and beverages for those who come to visit the altar, throne or procession during the feast.

An annual cycle of cofradía feasts celebrate God the Father, manifestations of the Virgin Mary and the infant Jesus, and saints like Pope Gregory the Great, Saint Nicolas of Tolentino, St. Rose of Lima, and St. Michael the Archangel. The celebration of these feast days generally coincides with their saints’ days on church calendars. Majordomos suggest that many of the dates link to the pre-Columbian calendar. The choice of saints can be linked to Spanish devotions, but do not simply reflect Iberian priorities. Many of the most commonly celebrated Spanish saints (e.g. Nuestra Señora del Pilar or Santiago Matamoros) are missing. The Hermandad de Jesús Nazareno and the Cofradía Niño Dios de María, the confraternities that bear responsibility for the major feasts of the church year – the Nativity and Holy Week – were not founded until the 20th century.

The feasts offer an opportunity to make an offering to the saint, and to receive something back from the community, usually food or some hot beverage. Worshipers do not linger in front of the statue or show the kinds of outward signs of great piety that have historically characterized Iberian piety. Visits to the shrine can be quick and seemingly relatively nonchalant. Following the visit, worshipers can be sing, dancing, and celebrate in around the shrine.

While Salvadoran religious culture tends to call attention to martyrdom, and many of the older cofradías had statues of martyrs, the majordomos of the cofradías never focus on martyrdom as a quality that makes the saint important. Often, the power of the statue is ascribed to the fact that it had been discovered, or rescued, miraculously. Its importance was somehow derived from that miracle.

Worshipers do make with intercessory requests, but in the oldest, more indigenous feasts, there seems to be no tradition of leaving ex voto offerings or memorials such as exist in other Latin countries, and even in San Salvador. The power of the statues to worshipers seems to depend not so much on a capacity to work particular miracles such as healings, so much as to temporarily bring the other world of the ancestors closer to the world of the living, and to mark certain times of the year.

The Spanish-language website Izalco Piadoso features a calendar of feasts in Izalco and many great photos and videos. A few examples below give some sense of the range of celebrations. 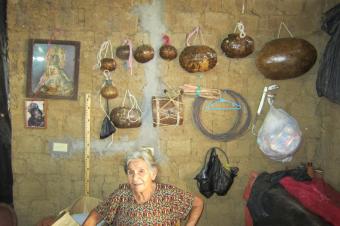 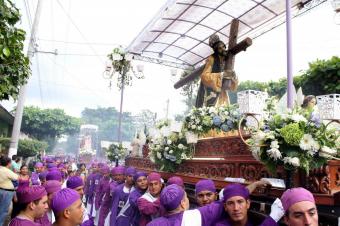 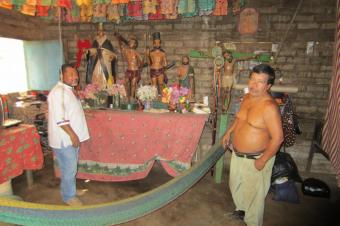 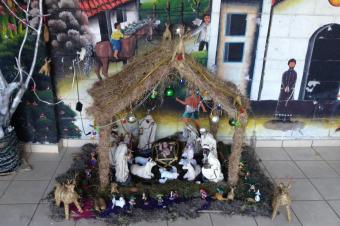 Christmas in El Salvador sparkles with creches and secular displays 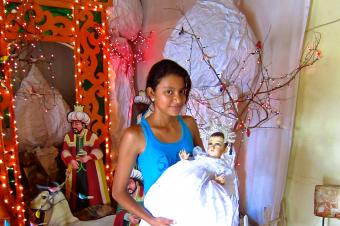 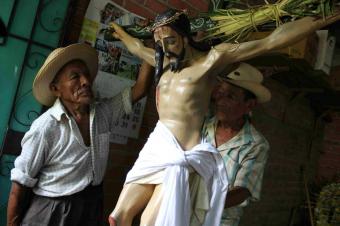 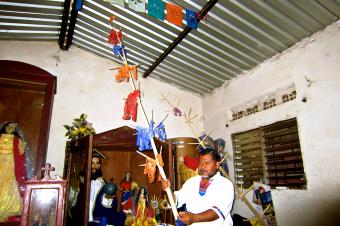