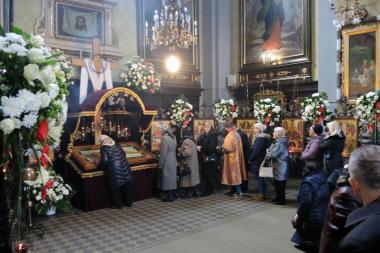 The Catholic Church is actually composed of 24 churches — one Latin (Roman), which comprises perhaps 98% of all Catholics worldwide, and 23 "Eastern" or “Oriental” churches. All recognize the authority of the papacy, but within the parameters of a shared creed, each church has its own forms of liturgy, devotions, and traditions. Each has its own hierarchy under a patriarch or archbishop, and distinctive Eastern legal canons. Liturgy is a defining aspect of these churches’ identity.

All of these churches embody traditions and practices that are at least a millennium old, and are heirs to the original Christian tradition of a particular region. Many trace their origins back to the apostles or to apostolic times. The term "Eastern" often is interpreted to refer to the churches that grew out of the liturgy and traditions of ancient church of Constantinople, capital of the Eastern half of the Roman Empire.  But it also extends beyond that, to churches formed in communities from present-day Egypt through Syria, Iraq, Ethiopia and India.  Peter Brown summarizes, “In the past thirty years a scholarly revolution has altered our notion of the first thousand years of Christianity… [S]cholars have turned to Africa and Asia to discover ancient variants of Christianity whose vast, largely forgotten presence once dwarfed the fragile beginnings of the Catholic Church in Europe.   We used to think that Christianity spread almost entirely in the Greek and Latin worlds.  Now we realize that ancient Christianity was like a great comet: its luminous trail once swept across the globe, from the Horn of Africa to the coast of Tamil Nadu, and from Mesopotamia to the court of the emperor of China.  Christian communities, linked by tenacious networks of trade and diplomacy, could be found in all those places.”1 The Eastern Catholic churches discussed here are the Catholic descendants of these early churches.

Orientalium Ecclesiarum, the Second Vatican Council's decree on the Eastern Catholic churches, asserts that the "variety" that the Eastern churches represent "within the church in no way harms its unity; rather it manifests it."  All of the churches, the decree reinforces, are of equal dignity to each other and to the Western church, under the authority of the pope.  All are encouraged to preserve and develop both their liturgy and "way of life."

The story of these ancient churches’ historic relations to Rome is complex.  After the great schism between East and West of 1054, most of the churches were aligned with Orthodoxy. Beginning in the late 16th century, some clergy and members of those churches united with the church of Rome. 2  Today, all but two of these churches - the Maronite Church and the Italo-Albanian Church - have counterpart Orthodox churches.

Each of the churches grew out of a particular geographic place and culture, and has been generally tied to strong nationalist sentiment, though these churches have now spread geographically to many parts of the globe.

View Vatican statistics on membership in each of the Eastern Catholic churches from 1990 to 2017 (pdf).