The entire compound of Matridham Ashram, outside the Hindu holy city of Banaras in North India, is considered to be holy ground. While the pavilion is the center of Catholic charismatic religious services, there are three other areas or spaces in the compound that are considered to be especially sacred: the shrine to Mary and the Child Jesus; the Chapel; and what is called the “Darśan Bhavan.”

As a sign of honor typical in Indic religious traditions, the statue of Mary and the child Jesus is garlanded. But what is especially important is the iconography that highlights the eyes. This artistic rendering is a product of an emphasis upon darśan or “seeing” the divine. Accordingly, making eye contact with the image—particularly Mary—is a crucial part of the act of devotion. The space surrounding Mary is cordoned off, as a sacred space in a Hindu temple would be, and only ritual specialists—in this case nuns—are allowed in close contact with the image. Because the entire space is considered sacred, devotees will prostrate themselves on the shrine’s steps. Children in need of healing have primary place and the devotees strengthen their petitions with offerings of rice or sweets, as would be the case in a Hindu temple as well. 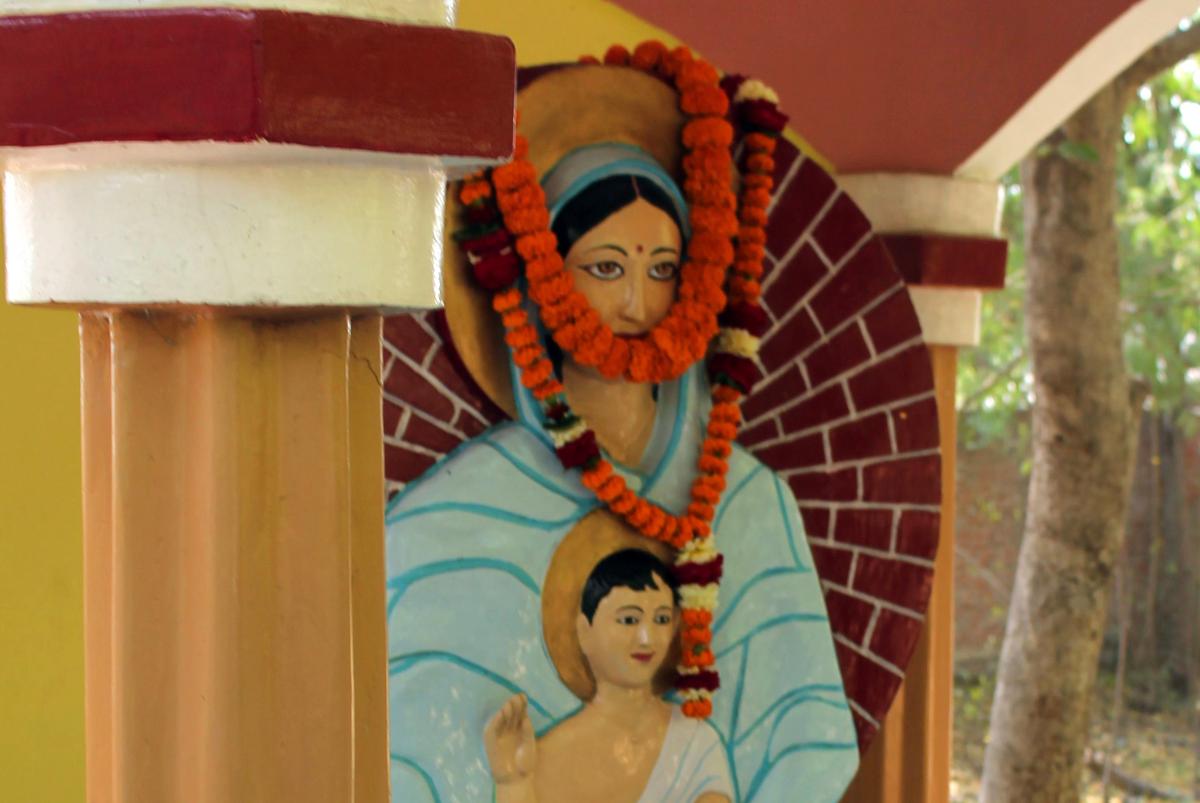 In this garlanded statue of Mary and the child Jesus at Matridham Ashram, the eyes are highlighted to emphasize darśan or “seeing” the divine. Photo by Mathew N. Schmalz.

Matridham Ashram was built during the heady days of the Catholic Ashram movement when the “inculturation movement” attempted to adapt Catholicism to Indic religious symbolism and practice. Although the Catholic charismatic renewal has effectively come to dominate inculturation at Matridham, the ashram still holds an Indian Christian experience retreat that focuses on appreciating Hindu religiosity and culture.

The most obvious and significant emblem of Matridham’s place in the inculturation movement is the chapel. The chapel has eight sides to represent the four directions of the universe and the intermediate spaces between them. These eight sides are brought together into “one pointedness” (ekagrata) by a spire, symbolizing a crucial theme in Hindu meditative practice. The cosmic symbolism continues on the inside of the chapel with three levels representing the underworld, earth, and the realm of the gods. The altar in the chapel is hewn from a single stone and is close to the ground so that the priest can sit on the floor as he celebrates Mass. The tabernacle is in the shape of a lotus to remind us, in the words of the ashram’s head priest or acarya, that “we are called to live in the world without blemishes, like the lotus that rises from the mud.” In the chapel, retreatants learn various Christianized forms of yoga and also participate in a Roman rite Mass especially adapted to North Indian custom.

In addition to its prominent place in Matridham’s inculturation efforts, the chapel has an important role in the second Saturday Catholic charismatic service. There is a heart-shaped pool from which pilgrims draw water for personal healing rituals. As with other sacred spaces—both within the ashram and within Indian culture more broadly—pilgrims reverently touch or prostrate themselves on the steps. They bring offerings that are piled high surrounding the altar, which has a portrait of Jesus based upon the Shroud of Turin. While there is a Eucharistic host displayed in a monstrance behind the altar, the crucial act of devotion is making eye contact with the image of Jesus. This is another example of the seeing the divine, or darśan, motif that is so central within the diverse forms of religious practice on the Indian sub-continent. Devotees will pray in characteristically charismatic style before the image, and some will clap and sing songs. Crutches and other signs of disability will sometimes be left in front of the chapel as proof of healing.

The prominence of offerings, both in the chapel and in other spaces in the Matridham compound, raises some complex ethnographic or anthropological issues. On one level, the offerings are exactly what they appear to be: gifts to please the deity in response to, or in hope for, a particular favor. On another level, however, any gift is thought to transmit something of the essence of the gift-giver. In this sense, the deity cleanses the devotee by accepting an offering of a particular gift. The entire effect of gift giving by the pilgrims is one of “lightening” the burdens of self—a form of what is called tapasiya or ascetic austerity.

The third sacred place of significance is what is called the “Darśan Bhavan,” literally “house of vision.” Framing the entrance, in large letters of Hindi’s devanagri script, are verses from 2 Chronicles 7: 16, 15, respectively: “I have chosen this temple and made it holy so that my name will always endure”; and “Those prayers that are offered here, my eyes will always see and my ears will always hear.” The Darśan Bhavan also holds artifacts from the area of Jesus’ ministry, like stones from the Red Sea and soil from the Holy Land.

The Darśan Bhavan holds artifacts from the area of Jesus’ ministry, like stones from the Red Sea (left) and soil from the Holy Land (right).

Inside the Darśan Bhavan, the focal point of attention is a monstrance with a consecrated host inset into a wall-size painting of the cross and, again, a fair-skinned Jesus. On the right hand side of the cross are the words, ”Do not fear, I am the beginning and the end”; on the left hand side, “Come to me and I will give you rest.”

Facing the monstrance and the cross/Jesus mural, leaders of the Matridham’s charismatic team will pray for specific intentions and for prophecy. Usually the prophecies are not about global events in the future, but instead about particular healings that will be actuated by the Holy Spirit during the prayer service itself. Given the significance of the Darśan Bhavan to the prayer service, its entrance is considered to be a portal to an especially sacred place, and so pilgrims will place garlands on the door, bring offerings, and pray in petition or thanksgiving.

“Christianity: Culture, Identity, and Agency,” in A Companion to the Anthropology of India, ed. Isabel Clark-Deces (London: Wiley Blackwell, 2011), 277-294.

“American Catholic, Indian Catholics: Reflections on Religious Identity, Ethnography and the History of Religions,” Method & Theory in the Study of Religion 13 (January 2001): 91-97.

The popularity and paradox of charismatic Catholicism in India and Sri Lanka
Learn More: