Holy Week, Easter take on penitential tone in the Philippines

During Holy Week, Filipino devotional culture takes on an especially penitential tone, in ways that particularly reflect its Spanish colonial heritage, and even its pre-Christian heritage, but have continued to evolve over the years. Filipinos who tend not to be fully observant liturgically the rest of the year see it as very important to participate in liturgies and devotions this week. The order of Holy Week liturgical celebrations in the Philippines matches that of the Church worldwide, but popular devotions assume a very important role alongside these. Taken together, these practices allow believers to observe, follow and actualize the events of the Passion, to somehow participate in the sufferings of Christ.

Holy Thursday and Good Friday are national holidays. Many Filipinos take the whole week off. Television and radio stations all turn to religious programming in place of regular shows. Stores close on Good Friday. Holy Saturday — Black Saturday as it is typically called in the Philippines — is a non-working holiday. Easter Sunday is not an official holiday, but it is fully observed.

The images of Holy Week in the Philippines that often get the most exposure in media worldwide are from San Pedro Cutud, San Fernando, Pampanga province, where male devotees whip themselves bloody or are even tied or nailed to a cross to manifest Jesus’ suffering. These devotions are discouraged by the Church, but often are respected by the faithful. Less extreme acts of penitensya are often typically part of Filipino Catholics’ Holy Week practice. Filipinos young and old often make a panata, a vow to participate in certain devotions, or to abstain from smoking, liquor, soft drinks, or meat over the course of the week.

As is true elsewhere, Palm Sunday has a festive element, as it recalls Jesus’ entry into Jerusalem. Still, the celebration takes place with awareness of the suffering that is to come, and in that way mirrors a Filipino society and self-awareness. In lieu of ordinary palms, many Filipinos buy palms (actually coconut leaves) that have been woven in elaborate decorative forms. These are blessed before the Palm Sunday liturgy. Filipinos take them home after Mass and attach them to the back of the main door of the house, or hang them in a corner, out of the belief that the palms will protect the household from danger. 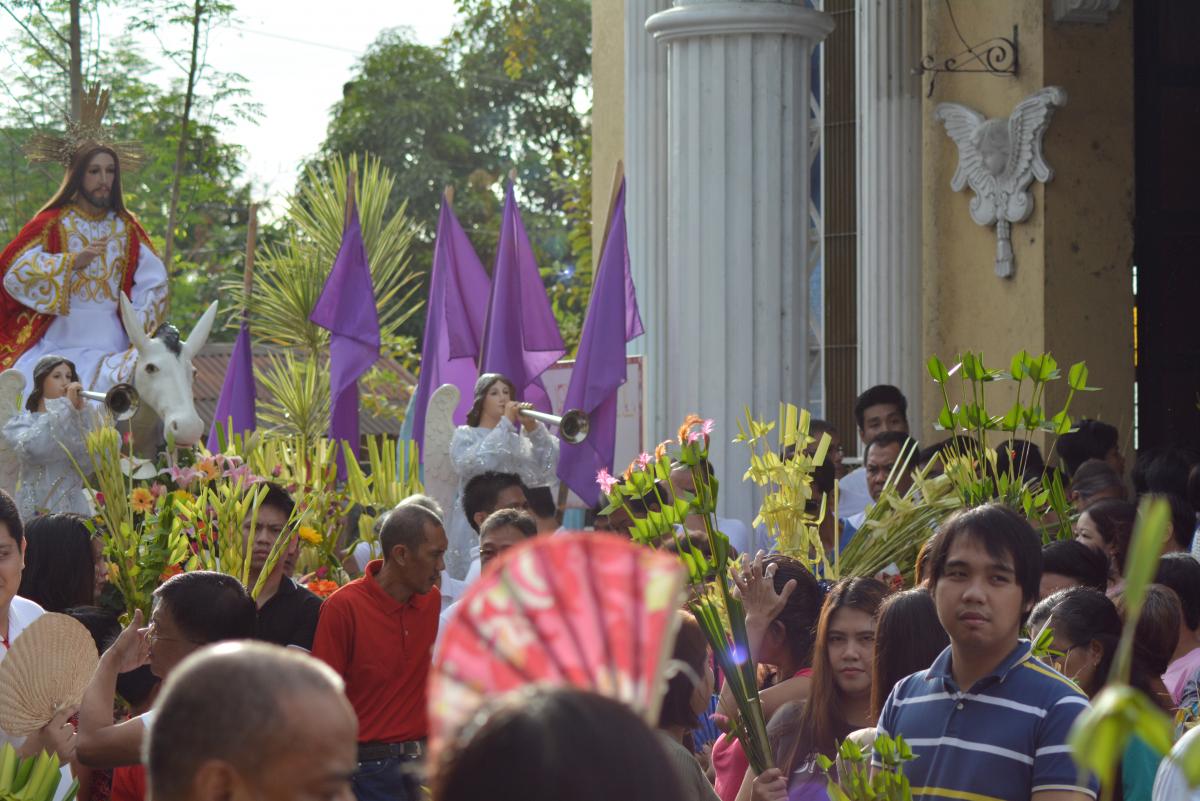 In the early part of Holy Week, parishes offer nightly evenings of recollection after Mass. Many also offer retreats. Bible sharing, family Rosary, and listening to the Seven Last Words are common practices in many homes.

In parishes, chapels, private residences and even in offices, barangay (neighborhood) halls, and prisons, people gather for the Pabása ng Pasyón – the recitation or chanting of the story of the Passion, as told in verse. This old Filipino tradition takes place over the course of 24 hours in front of a statue representing Jesus’ Passion.

Sometime during Holy Week (or even on several nights), a Senakulo — a stage or street play about the life and Passion of Jesus — takes place in many communities, especially in Bulacan, Rizal and Pampanga provinces.1 Whereas a Pabása entails singing or reciting the Passion, a Senakulo performs it in full costume and drama. An outdoor Senakulo often parades a figure of Jesus carrying the Cross through the streets, and emphasizes the violence and brutality of Jesus’ persecutors. Bloody reenactments at San Pedro Cutud, San Fernando, Pampanga, Kapitangan, Paombong, Bulacan, the Ang Pagtaltal Sa Balaan Bukid at Jordan, Guimaras Island are the most infamous versions of these plays, but the style and interpretive message of the Senakulo varies. The Senakulo at Malolos, Bulacan is more representative. In some settings today, the performance takes place on projected video screens, but the experience is still communal.

Processions also play a significant role in Filipino celebrations throughout Holy Week, and can occur with different variations on various days of the week.  In Malolos, Bulacan and in Rizal province, big processions with statues of Jesus, Mother Mary, 12 Apostles, and many saints take place Holy Wednesday from 6 am until evening. Saint Augustine Church, Baliwag, Bulacan, is known for its Lenten procession on Holy Wednesday and Holy Friday, which is believed to be the longest procession in the Philippines, with 111 richly adorned floats of dioramas depicting the scenes of the Passion and death of Jesus Christ.

For laypeople, as in other countries, the primary liturgical focus of Holy Thursday is the evening Mass of the Lord’s Supper, with the ritual washing of the feet. Only men are chosen for the washing of the feet, usually men from the religious organizations of the parish. After this Mass, as elsewhere, the altar is stripped bare, religious images are covered, and the Blessed Sacrament is removed from the main tabernacle to an altar of repose. In many smaller chapels at a distance from the parish church, a “dry Mass” is led by a delegated lay leader.

Another important pious tradition, the Visita Iglesia, or visit of the churches, takes place during the remainder of the day on Holy Thursday and can extend into Good Friday. It involves visits to seven churches for prayer and reflection on the Passion.

Good Friday is a solemn day when businesses close, and fasting and abstinence are more strictly observed.

In some parishes in Manila, and many parishes in the provinces, dawn processions recall the Stations of the Cross using figures and stories of the Passion.

A barrio in Panabo City, Davao del Norte, Philippines, sets up stations for believers to walk the Way of the Cross on Good Friday.

Parishes often set up stations in the town for believers to walk the Way of the Cross and organize opportunities for preaching and reflection on the Seven Last Words of Jesus, both in churches and in other locations. As is true elsewhere in the Latin church, a 3 p.m. Good Friday Service of Commemoration of the Passion takes place in the church.

Pahalik, a devotion that involves kissing an image of the dead body of Jesus, is a Good Friday devotion that takes place in every church. In some churches, it includes a procession of the Santo Entierro, the Holy Burial, which includes carriages with statues of the story of the Passion. The main carriage is an elaborate casket in which the body of Jesus can be seen laid out, ready to be taken to his tomb.

Holy Saturday is sometimes known in the Philippines as Black Saturday, or still in Spanish as Sabado Santo, or as Sabado de Gloria in reference to the renewed chanting of the Gloria during the Easter Vigil. Practices like Visita Iglesia and Stations of the Cross and confession are part of the day for many families who have not done this already.

Midnight Mass, the Easter Vigil, is celebrated as elsewhere, usually with an outdoor fire build from wood, and the blessing of the Paschal candle.

Masses are crowded to overflowing even more than usual, often into the square. After Mass, people greet each other, “Maligayang Pasko ng Muling Pagkabuhay”: “Merry Christmas of [Jesus’] resurrection.”

Children participate in Easter egg hunts near the church, at home, and sometimes at shopping malls. 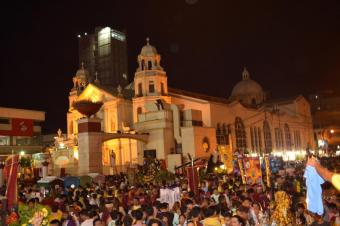 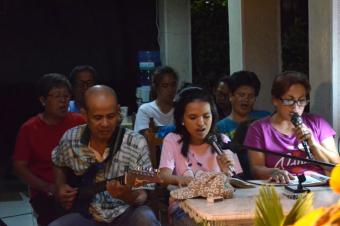 Pabása ng Pasyón: Chanting the Passion for Holy Week in the Philippines 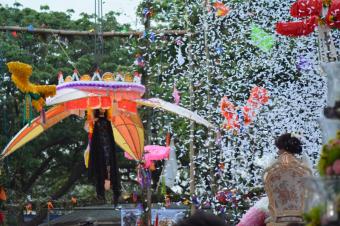 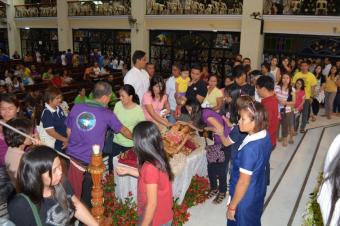 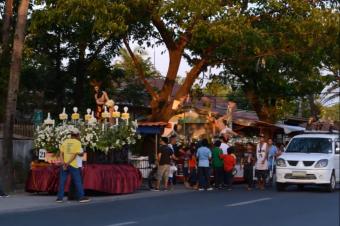 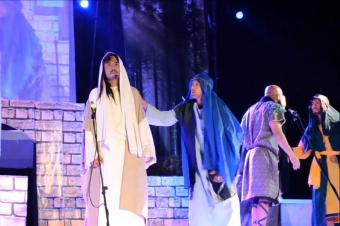 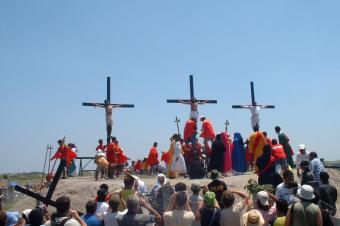 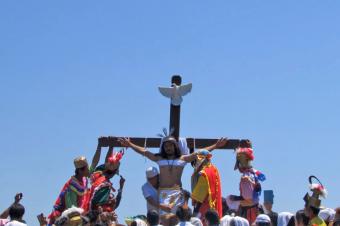 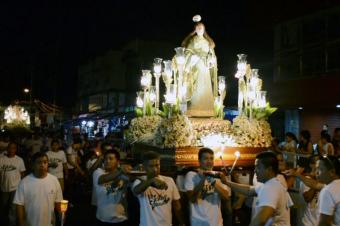