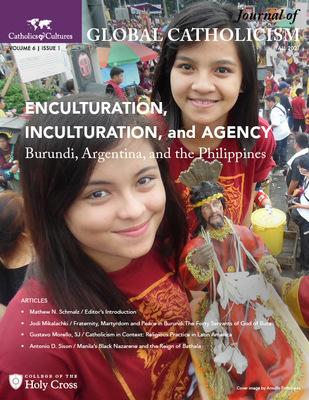 The new issue of the Journal of Global Catholicism, published December 20, 2021, features three vignettes into different ways Catholics and Catholicism work in and through enculturated forms of religiosity. But rather than inculturation of local practices by the official Catholic Church, these articles identify a variety of different kinds of agencies that work to make Catholicism not just diverse, but also deeply meaningful.

In Jodi Mikalachki's piece, "Fraternity, Martyrdom and Peace in Burundi: The Forty Servants of God of Buta," she describes the scene when 40 students of Buta Minor Seminary were murdered for refusing to separate by ethnicity during Burundi's 1993-2005 civil war. They chose instead to join hands and affirm their common identity as children of God. The forty students killed were quickly proclaimed martyrs of fraternity. Drawing on extensive interviews with survivors and family, Mikalachki then examines how Burundian Catholics understand the significance of the Buta martyrdom to their country and the world.

In the second article, Gustavo Morello, S.J., reports on an extensive three-year study of religion as practiced by Latin Americans in their daily lives. By choosing not to focus strictly on attendance, adherence and affiliation, his research team noted how religious influences have been pluralized, and religious practices are diverse and occur everywhere. There are no “exclusive” secular or religious spaces, objects or times, and religious practices are not circumscribed to “the religious,” but they hold deep personal meaning for the believer.

Finally, Antonio Sison visits the Quiapo Black Nazarene in Manila, Philippines and reflects on the source of the devotion that draws millions to its feast. He considers the importance of "pagdama," or felt-experience, to Filipinos and identifies Filipino Catholic devotional practices that appear rooted in primal religious expressions part of Filipino memory and agency.

Catholics & Cultures' home institution, the McFarland Center for Religion, Ethics and Culture at the College of the Holy Cross, will host Mikalachki and Morello for talks on their research during the Spring 2022 semester. Video will be posted online.