Africa the focus of newest issue of Journal of Global Catholicism 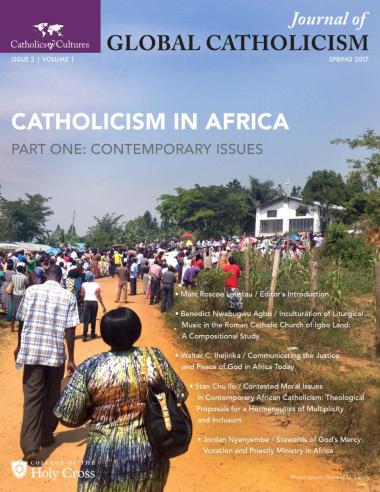 The second issue of the Journal of Global Catholicism, "Catholicism in Africa Part One: Contemporary Issues," is now available for free download. A publication of Catholics & Cultures at the College of the Holy Cross, JGC is an international, interdisciplinary peer-reviewed academic journal that fosters understanding of diverse forms of lived Catholicism.

Articles in the issue discuss liturgical adaptation, music, communication, moral theology, and priestly ministry. The articles are derived from the work of scholars who participated in a special colloquium on the Future of Catholicism in Africa in Nigeria in late 2015, organized by the Center for World Catholicism & Intercultural Theology (CWCIT) at DePaul University. The articles include:

In his Editor's Introduction, Marc Roscoe Loustau writes, "We are committed to the exciting prospects heralded by the new, open-access age in academic publishing. Articles in our premier issue, 'Indian Catholicism: Interventions & Imaginings,' were downloaded more than 700 times by readers in 54 countries. In the past year, the Catholics & Cultures website has had 263,000 page views in nearly 100,000 user sessions from viewers in the United States, the Philippines, India, Australia, the United Kingdom, Canada, and countries all over the world. These statistics reflect our commitment to expanding and breaking open scholarly conversations about Catholicism in Anglo-American academic institutions."

Read the journal at http://www.catholicsandcultures.org/journal.

A second issue on Africa is forthcoming.