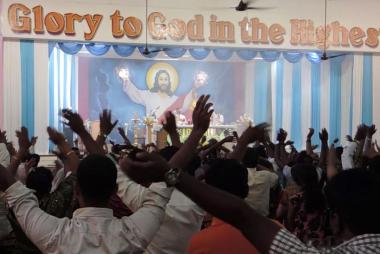 WORCESTER, Mass. — The College of the Holy Cross has launched an ambitious online global initiative called Catholics & Cultures (www.catholicsandcultures.org). The encyclopedic web resource—free to all users—is managed by and housed in the Rev. Michael C. McFarland, S.J. Center for Religion, Ethics and Culture at the College.

Catholics & Cultures is the first initiative of its kind to study and share stories of the religious life and practices of ordinary lay Catholics in the particular places where they live around the world. Content is organized by both country and theme, and includes scholarly articles, demographic data, videos, photographs, interviews, and more.

Rev. Philip L. Boroughs, S.J., president of the College, officially introduced the initiative to the College Community and the public at a launch event and reception on Feb. 4, 2015.  The event featured viewing stations, and an opportunity to explore the range of content from more than 15 countries including Sri Lanka, Jamaica, Ireland and Ethiopia.

“Catholics and Cultures offers scholars, students and the general public an opportunity to explore the practice of Catholicism as it is experienced around the world,” said Fr. Boroughs. “As a global faith community, the sacramental and devotional life of Catholicism is expressed in a multitude of ways reflective of the distinct countries and cultures in which the faith community resides. As this web resource grows and develops, I look forward to seeing how it will help shape and deepen people’s engagement with Catholicism."

The content on Catholics & Cultures is organized by country and by more than 16 themes such as shrines, feasts, worship, family, marriage and gender roles, Christmas and Holy Week. The site also explores communities and practices of the Eastern Catholic churches. Web visitors will be able to delve into the rich content of a single culture as well as draw comparisons among many.

“Most Catholics experience faith from a single cultural lens, and would be surprised at how different Catholic life looks in many other countries and cultures,” explained Thomas M. Landy, director of the McFarland Center and founder of Catholics & Cultures. “From street processions to shrines in the home, charismatic worship styles and liturgical chants lasting hours, to fasting, burial and devotion rituals influenced by Buddhist, Muslim or indigenous cultures, these are the untold stories of the Catholic experience.”

For example, in many secular societies, Catholic expression is largely reserved for home and sacred spaces, but other cultures practice Catholicism publicly, with religious displays in city squares, streets and stores. In El Salvador, neighborhood confraternities serve as custodians of religious statues and stage annual feasts and processions honoring their saints and the memory of their ancestors. Shrines and pilgrimage play an important role in Indian Catholicism, and — blending Hindu and Catholic tradition — devotees often take and leave bits of salt, peppercorns and sweets at the base of statues.

Catholicism can be shaped by indigenous traditions, Pentecostalist influences and migration patterns. In Hong Kong, the Catholic population is largely comprised of migrant domestic workers from the Philippines who spend their only days off at church. The popularity of Pentecostal worship styles has given rise to a growing Charismatic Catholic movement in many countries throughout the world.

The website will continually be updated and expanded as scholars around the world engage in the study of lived Catholicism. In coming months, new research will be added on the Philippines, Argentina, Lebanon and China.

As Catholics & Cultures grows, abundant opportunities for collaboration with scholars and students will arise. A number of students already have contributed to the initiative, on research trips with faculty, in class projects, and with the development of the website. In addition to the website, the Catholics & Cultures initiative will host scholarly conversations lectures, and international conferences, and an online Journal on Global Catholicism, to be edited by Mathew N. Schmalz, associate professor of religious studies, will be introduced later this year.

As part of Catholics & Cultures, Landy and Schmalz traveled to India where they initiated and cosponsored a workshop on rites, religiosity, and cultural diversity in Indian Catholicism. “India is a multicultural society and home to three rites (Roman, Syro-Malabar, Syro-Malankara) within the Catholic Church.  This unique combination has created a particularly rich and diverse context for Catholic religious life. The workshop examined how Catholic life is practiced in India’s different cultural and Catholic contexts,” said Landy. Cardinal Cleemis, Major Archbishop-Catholicos of the Syro-Malankara Catholic Church, opened the workshop, and attendees included bishops, scholars and clergy from the three churches. Learn more about the international workshop “Catholic Cultures, Indian Cultures.”

The College is working with the University of Santo Tomas in Manila, the Philippines, to plan a conference there for January 2016.

View Catholics & Cultures site at www.catholicsandcultures.org or go to www.holycross.edu/mcfarlandcenter for more information.

About the Rev. Michael C. McFarland, S.J. Center for Religion, Ethics and Culture:

Established in 2001 and housed in Smith Hall, the McFarland Center for Religion, Ethics and Culture provides resources for faculty and course development, sponsors conferences and college-wide teaching events, hosts visiting fellows, and coordinates a number of campus lecture series. Rooted in the College's commitment to invite conversation about basic human questions, the Center welcomes persons of all faiths and seeks to foster dialogue that acknowledges and respects differences, providing a forum for intellectual exchange that is interreligious, interdisciplinary, intercultural, and international in scope.  The Center also brings members of the Holy Cross community into conversation with the Greater Worcester community, the academic community, and the wider world to examine the role of faith and inquiry in higher education and in the larger culture. Catholics & Cultures fulfills the McFarland Center’s broader mission to explore the relation of religion and ethics to culture.

The College of the Holy Cross (holycross.edu), located in Worcester, Massachusetts, is among the nation's leading liberal arts institutions. A highly selective, four-year, exclusively undergraduate college of 2,900 students, Holy Cross is renowned for offering a rigorous, personalized education in the Jesuit, Catholic tradition.  Since its founding in 1843, Holy Cross has made a positive impact in society by graduating students who distinguish themselves as thoughtful leaders in business, professional and civic life.