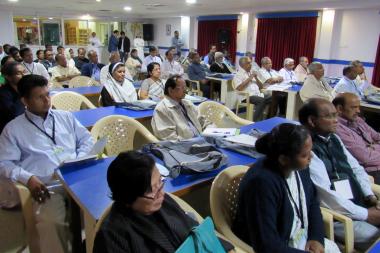 Catholics & Cultures, an initiative of the Rev. Michael C. McFarland, S.J. Center for Religion, Ethics and Culture at the College of the Holy Cross, Worcester, Mass., co-sponsored a four-day workshop January 12-15, 2015 in Bangalore, India on "Catholic Cultures, Indian Cultures: A workshop on the rites, religiosity, and cultural diversity in Indian Catholicism." The workshop was the first occasion to bring together religious and lay leaders from the Latin Church and the Syro-Malabar and Syro-Malankara Eastern Catholic Churches to explore lived Catholicism.

Cardinal Cleemis, Major Archbishop-Catholicos of the Syro-Malankara Catholic Church, opened the workshop, and attendees included bishops, scholars and clergy from the three churches. Landy gave an opening keynote address on the importance of studying lived Catholicism. Mathew N. Schmalz, a Catholics & Cultures scholar and editor of the Journal of Global Catholicism, spoke on "Lived Catholicism and the Problem of Culture" and "Dalit Practices."

"The study of lived religion requires a definitional openness at the starting point to what religion (and Catholicism) is — a willingness to look for religion wherever and however it is understood by the people we are engaging” said Catholics & Cultures founder Thomas M. Landy.

The workshop was co-sponsored with Dharmaram Vidya Kshetram, Bangalore, a Pontifical Athenaeum of Philosophy, Theology and Oriental Canon Law.