India • Feast of the Nativity of the Blessed Virgin Mary 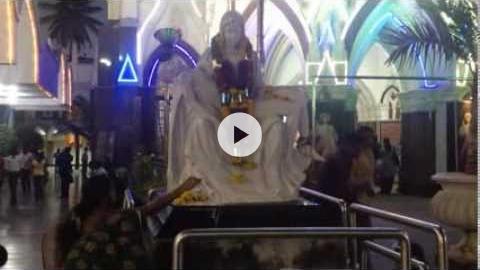 Our Lady of Good Health in Bengaluru (formerly known as Bangalore) is the most prominent Catholic shrine in the city. Surrounded today by a predominantly Muslim neighborhood, the shrine buzzes with activity, especially in the early morning and the evening. It is home to a celebrated feast that culminates on September 8th each year, the Feast of the Nativity of the Blessed Virgin Mary. The shrine features a basilica church where there are Masses and lay preaching, and two other statues of the virgin and child in the outdoor arcades.

Worshipers at the shrine include as many Hindus as Catholics, in part because Hindus tend to be comfortable drawing non-Hindu religious figures into their worship life. In interviews at the shrine, visitors said that they came for peace, and to pray for prosperity for themselves and for all. They refer to Mary especially as Mother Mary. The phrase "prosperity for all" came up as often as one might hear people pray for "world peace" in many other countries.

The comments posted on the shrine’s website give some idea of the sorts of things that people pray for: healing of family disruptions, physical health, financial problems, infertility, work-related problems. Poorer devotees report similar concerns, along with prayers for housing and jobs, especially when these have been taken by injustice or calamity.

The shrine’s major annual feast, which draws hundreds of thousands of people, is described on its website as follows:

The Main feast is celebrated with all grandeur on the 8th of September, the Feast day of the Nativity of Blessed Virgin Mary, every year. This feast is considered by the people, not only as the Feast of the Parish, but also for the whole of the Archdiocese and State of Karnataka.

In preparation to the Feast, nine days novena is observed, wherein Holy Masses are celebrated through out the day, in which thousands of people participate with ardent devotion. Throughout the Feast the devotees are found to be dressed in ‘Saffron’ clothing. Archbishop blesses the flag and joins the Chief Guests in hoisting the flag. This hoisting of the flag symbolizes that our hearts too are to be raised towards the Almighty God with the perpetual help of Our Lady. Thousands of people gathered around the flag post, join in singing the praise of Mary Our Mother – ‘Ave Maria’ (Praise to Mary) and the song fills the air.  As per tradition, the flag is hoisted everyday, beginning from the Flag Hoisting day till the ninth day of Novena.

On the Feast day, September 8th, people gather in Lakhs [i.e. by the hundreds of thousands], without any distinction of caste, creed or religion, not only from all parts of Bangalore, but also from all over India to pay their homage to Our Lady. The whole city embraces the festive mood on that day. Through out the day people flock in with lighted candles and flowers to pray and thank Mother Mary.  In the evening, around 5:00 p.m., a grand car procession – a chariot carrying the 6 feet statue of Mother Mary, draped in a wonderful silk saree, with spectacular illuminations and decorations, is carried on the streets of Shivajinagar. 1