The geographic heart of La Tirana is the “temple,” or sanctuary, of the Virgen del Carmen. This is the most important site in the city, where the pilgrims have two chances to dance before the Virgin. Outside, the large plaza in front of the church is the site of the major celebrations on the vigil and feast day, and as many outdoor dances as the plaza and surrounding streets can accommodate. Streets, except at the perimeter, are largely closed to vehicles.

While these sites are full of activity, the bailes1 spend much of their time outside of the plaza area. The plaza cannot accommodate the estimated 200,000 who attend the feast. Thus, the rest of the city takes on its own sacred geography.  Bailes members generally live at La Tirana from July 10-19, but some members need to be there before and after that to set things up and to pack them away.

Though there are small restaurants, butchers and fruit stands around the plaza, most of the commerce is delegated to a large area just to the east of the plaza, the site of market stalls selling all manner of small household and personal goods, staffed by vendors who often sleep in their open stalls at night. In this big, shaded maze of booths, one could easily forget that La Tirana is home to a religious feast. Religious goods are sold elsewhere, in a dozen or more stalls across from the rear of the temple.

In a variety of other ways, however, the rest of town and its outskirts have an additional sacred geography. A primary manifestation of this geography is the living compounds for each of the 197 bailes, each with a sign for that baile at the entrance, and a decorated statue of the Virgin of Carmen and the baile’s banner visible at the center of the compound. The sacred purpose of these small communities is marked by the visible presence of the Virgin at the front or center, and by the tight sense of belonging within each baile. This is where the dancers will spend most of their time.  Each group’s statue of the Virgin also goes with them out into the streets when they dance, marking those spaces as sacred and directing their work toward her. At almost any time, particularly when the square is full, dozens of statues can be there and in the streets.

The sacredness of La Tirana is also apparent in the decision of a number of families to defer sacraments of baptism or marriage so that these can be celebrated in La Tirana (there are separate chapels away from the main sanctuary where these occur), and even for regular feast-goers to choose to have their bodies brought back from their home cities to be buried in one of La Tirana’s two cemeteries at the outskirts of town. 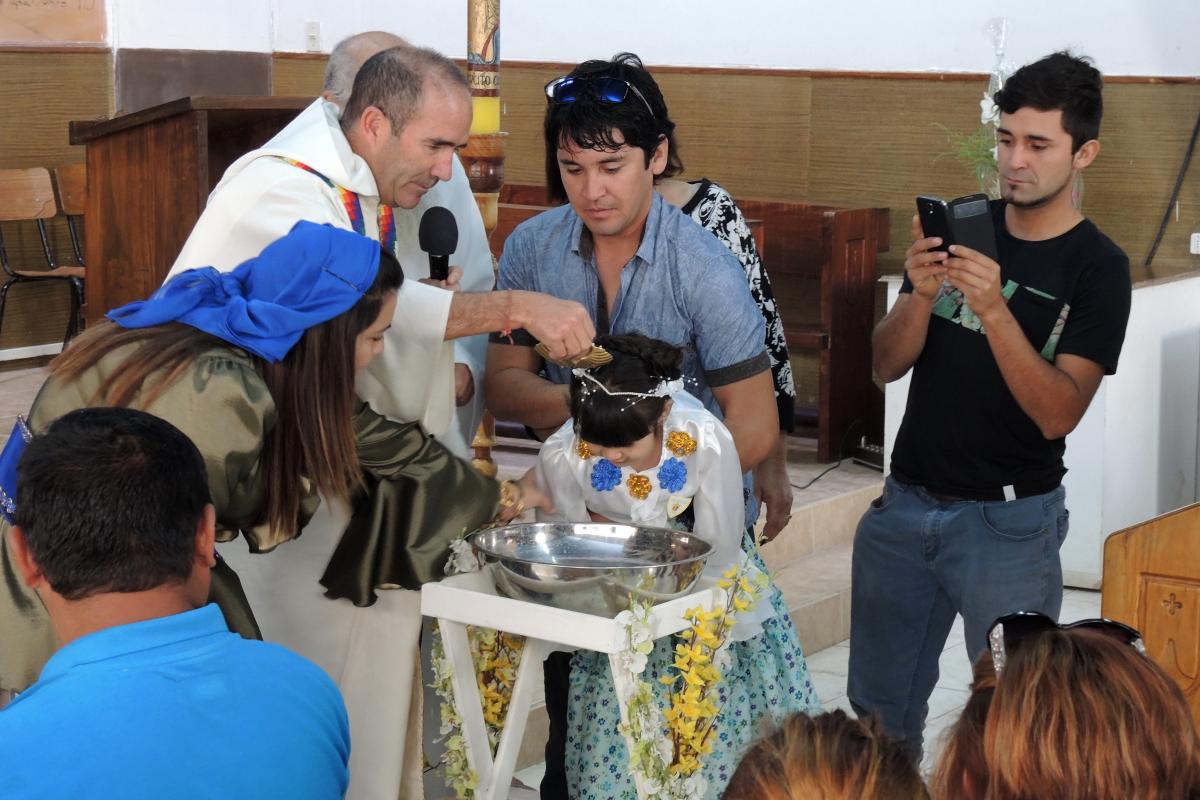 A young girl is baptized at La Tirana. Many families defer sacraments so that these can be celebrated during the feast.

By design, three dances take place outside the central plaza: the first entry dance before the entry to the temple is at the Cruz del Calvario, or Calvary Cross, a small and fairly new plaza at the entrance to town; at each of the bailes, at designated times when one baile hosts another for lunch, afternoon tea, or dinner, and at a third dance beginning after midnight on the feast day, at designated sites among the camps and houses in town.

The excitement and fervor of the dance and feasts in La Tirana is an obvious source of attraction, but so too is the experience of living there together in community, having worked to make that possible. Each of the 197 bailes has its own communal home, either an enclosed lot in town with a (sometimes quite makeshift) set of rooms and a common area, or a designated lot outside of town where it can create a compound with tents. The majority of the city is taken up by compounds for bailes, used only once a year for that purpose, each for a single baile. A huge swath of land outside the built landscape of the town is given over to tent encampments for bailes as well.

In the city itself, the most well off (and generally oldest) bailes own or lease a lot where they built a wood or concrete block structure of one or two stories. Near the front of the building, always visible from the street when the gate is open, the baile keeps its own large image (or two) of the Virgin of Carmen. Typically there is a common kitchen in the back, and a corridor that serves as a place for meals and communal gatherings. To the sides, most bailes have rooms with four bunk beds – but some also have large open rooms with dozens of bunks.  Though the temperature drops to near freezing at night, none of the facilities is heated, nor do they have hot water, except what solar provides during the day. 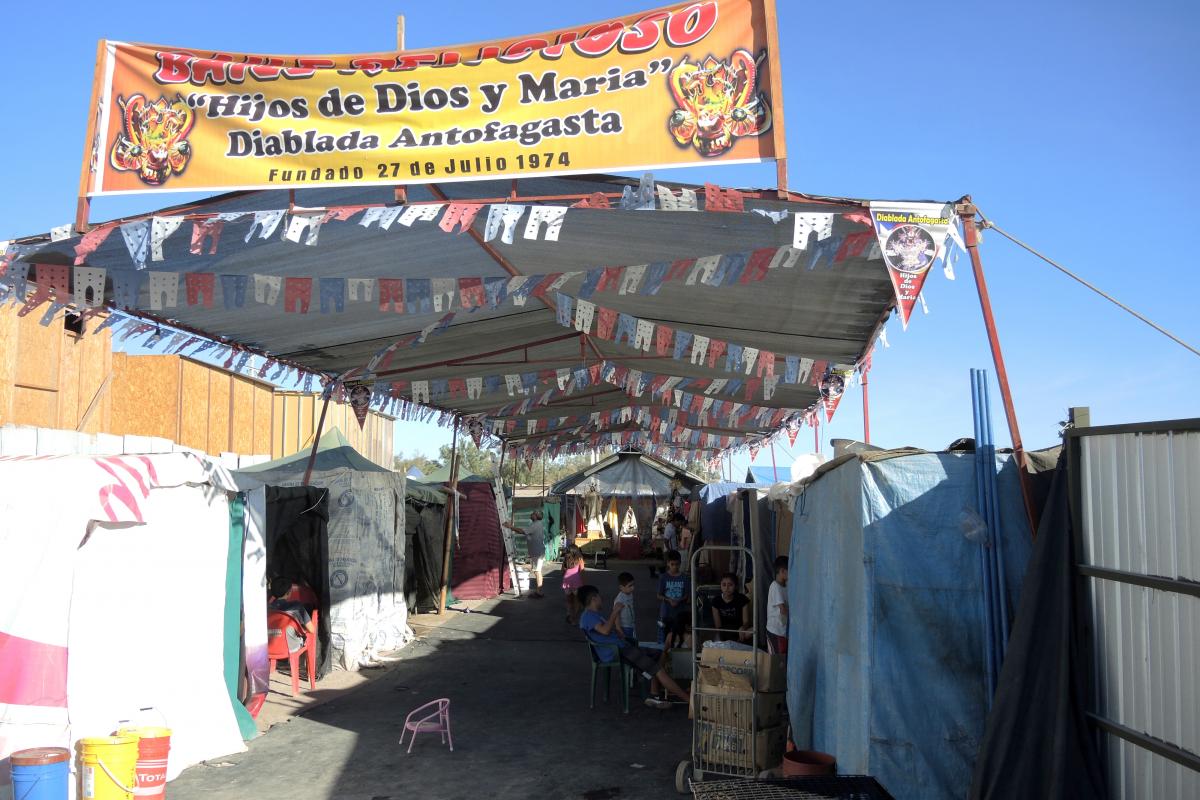 As the feast has grown, many of the 197 bailes cannot be accommodated in town. The diocese owns land outside of town that it leases long term for nominal rent. Newer bailes have a lot where they can set up camp.

Outside the old bounds of the town and its peripheral road, tent areas stretch out to accommodate the groups who can’t afford to live in town, or who were founded too late to have space in town. Their lots belong to the diocese, but the dance groups have 50-year leases on them.

The communities of the bailes include not only bailarínes — dancers — but also other members, socios, or partners, who help with cooking, cleaning, setup, ironing of costumes and a whole array of things necessary to keep daily life moving. Usually they are family members, sometimes adults who say they are too old to dance anymore themselves, but want to keep the tradition alive, and sometimes also family members who don’t have the same degree of faith in the Virgin but who come along anyway to be of help to loved ones.  Much of the ordinary work of keeping the structures up falls to the socios.

One key aspect of community life is the experience of sharing meals together.   Women do most of the cooking. One reported, “we older women cook best,” but on the feast day itself, she said, “the men cook and we get to rest.” Several interviewees echoed with appreciation that, “We eat from one big pot, and everybody eats the same.”

The extended time that people spend living together contributes to the attachment people have to the feast. One woman reported, surveying her group’s camp and the camps around her, “This is a lifestyle. My friends are from religious dances. This is the world I’ve acquired. I learn other things from people outside the religious dances, but this is my home space. The same is true for my children. The friendships that form in places like this, not only with children from Arica, but from other places, is special as well.”

La Tirana has no hotels or at least no upper- or middle-class tourist infrastructure. The bailes belong to the working poor (“the bottom half of society,” one dancer said), and the accommodations reflect that. A small number of dancers and visitors rent a simple room in a private building for the week, sleeping and cooking in the same room. Pilgrims to La Tirana sometimes walk part of the distance from the city of Iquique or from a smaller, closer town nearby (the government has built special paths for this, paralleling the roads), but most arrive by bus or car, coming in and out for the day.

For practical reasons, according to dancers, alcohol sales are forbidden in La Tirana during the feast. The federation apparently leaned on the bishop to work with the government to prevent sales. One can still see wine or beer in some of the bailes houses or camps, but not much, and drinking is discouraged for fear that drunkenness will mar the festival, and undermine its religious quality.

The community and interaction between dance groups is enabled through association meetings and shared rituals in their home parishes. Dancers will spend time in the square watching other groups dance, but generally, that dance time is not as interactive, since the dancers are focused on the task at hand. The associations arrange for visitations between bailes as a special way to introduce them to each other. Each groups in the association draws lots for who they will host, and takes a turn during the week hosting a group and visiting another. The visiting group comes to the host group’s compound singing and dancing, there are speeches of introduction and welcome, and the host group provides a meal for the visitors. Visitation is the only time that a dancer may eat while wearing a traje (sacred costume).

Wearing their trajes, or sacred costumes, bailes dance and sing before the hosting group's image of the Virgin and then the two groups share a meal.