In Salta, in north-central Argentina, Marian devotion is part of the fabric of everyday life. Centuries-old advocación of the Virgin continue to have an enduring influence in people’s daily lives. Even Catholics whose adherence to the faith is otherwise limited consistently appeal to the Virgin Mary as a powerful intermediary and loving protector. Marian images are visible in prominent places on public buildings, in parks, in businesses, in living rooms and on small pieces of jewelry.

Residents of Salta have long been especially devoted to the Virgen del Milagro, patroness of the city, and residents of nearby towns have their own primary Marian devotions. In recent years, though, a newer manifestation of the Virgin — popularly known as the Virgen del Cerro and formally titled La Inmaculada Madre Del Divino Corazón Eucarístico De Jesús, the Immaculate Mother of the Divine Eucharistic Heart of Jesus — has taken hold of Catholics’ imaginations in Salta and beyond. Without apparently displacing devotion to the Virgen del Milagro, the Virgen del Cerro has drawn a large and very devoted following of Catholics who believe that Mary present to them and is especially able to connect with them through this new advocación. On Saturday mornings, crowds from the region and from as far as Buenos Aires visit the Virgen del Cerro’s hilltop sanctuary, and her image is prominently displayed for sale in many downtown tourist and religious shops.

Beginning in 1990, a laywoman, Maria Livia Galliano Obeid, claims to have had apparitions of Mary and then the Sacred Heart of Jesus.1 She first revealed these only to her confessor, but eventually brought them to the attention of the Carmelites. In 2000, Maria Livia says that the Virgin requested that a sanctuary be built to her on a hilltop above the city of Salta. In 2001, devotees built the tiny chapel using materials carried up on their backs,2 and devotion to the phenomenon grew significantly. A 2005 report to the Archbishop of Salta claimed that the number of pilgrims in 2004 was almost 300,000 people.3 In 2005, as crowds grew, devotees added a large parking lot and road for shuttle buses to supplement the footpaths that were the traditional means to reach the sanctuary chapel.

Today, a tiny stone chapel in the sanctuary features a statue of the Virgin as Maria Livia described her, and is surrounded down one side of the hill by benches built for crowds who come to pray there.

Though the messages that Maria Livia claimed to have received came from both the Sacred Heart and the Virgin, almost all of devotees’ attention seems to be focused on the Virgin. Her popular name, la Virgen del Cerro, refers to the hill (cerro) where visions are said to continue, but her formal title refers to the name that Maria Livia said that the Virgin spoke to her, much like at Lourdes, announcing, “I am the Immaculate Mother of the Divine Eucharistic Heart of Jesus.” 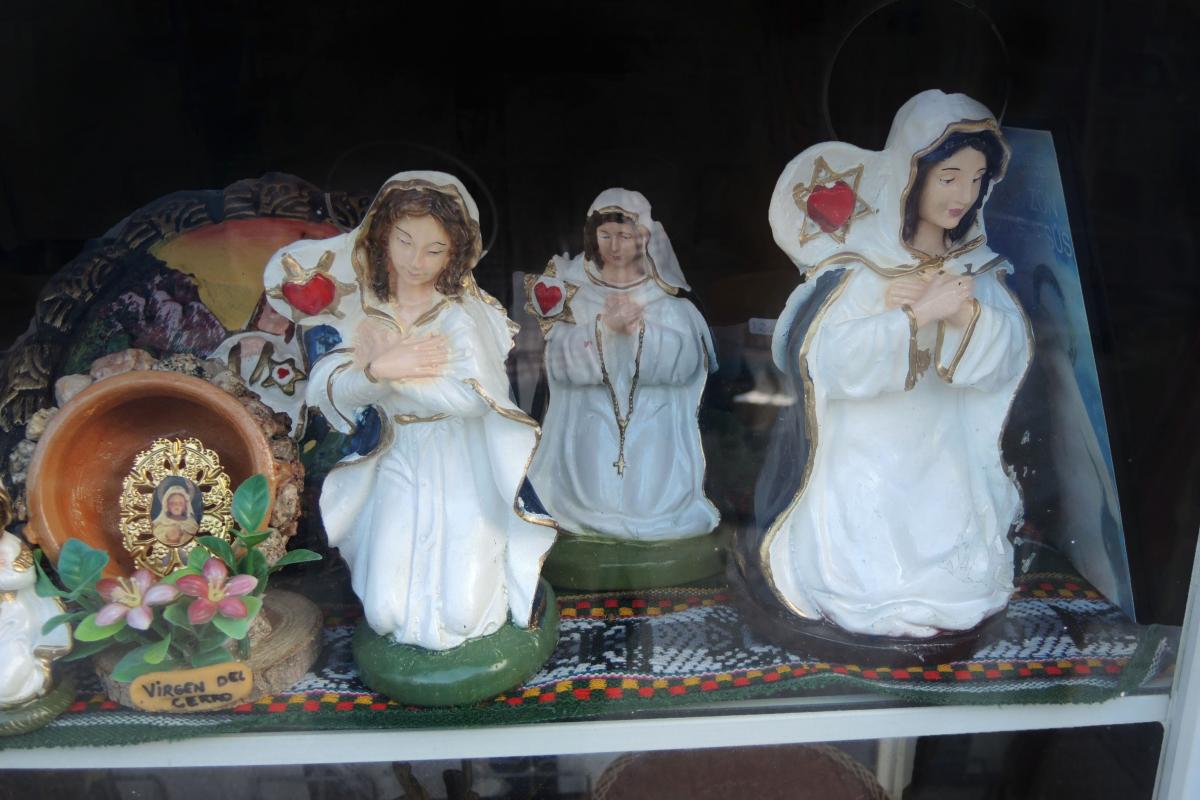 Statues of the Virgin del Cerro, a recent but extremely popular unsanctioned apparition and devotion in Salta, Argentina.

The image of the Virgen del Cerro differs significantly from the traditional form of Marian statues in Argentina, which usually show only the face and perhaps the hands of the Virgin, who is in an often brocaded or laced triangular dress that shows no trace of physical embodiment. The Virgen del Cerro is more embodied and sentimentalized, with curving lines that are reminiscent of many contemporary porcelain figurines. She is depicted kneeling in prayer, rather than standing, wearing a flowing dress and veil. Maria Livia described the figure who visited her as having a child’s face and blue eyes, around 14 years old, in a white dress, blue robe and white veil.4 Her kneeling position seems to emphasize humility and prayerfulness — she is often depicted with a Rosary draped from her hands — rather than as a power in her own right, though her devotees often describe her as having the power to heal and to see to all their deepest needs.  Above her is a gold star in Star of David form, with a heart and the letters “IHS,” for the name Jesus.

The cult of the Virgen del Cerro is not formally approved by the Church, but the site itself suggests that the cult is not marginalized, either. The grounds include numerous confessionals for priests. The Carmelite sisters of Salta have helped support and guide the cult, and apparently own the land it is on. The archbishop has approved publication of some of the reported visions and appointed a commission to study the phenomenon. The Virgin’s formal name, and everything apparent about the grounds and website, reinforces orthodox Catholic piety, and lay Catholics who visited there had no hesitation accepting its authenticity and the status of Maria Livia as an intermediary to Mary. On the other hand, it is interesting to note that among the hundreds of statues of the Virgin borne at the feast of the Señor y Virgen del Milagro, none of the statues people carried was of the Virgen del Cerro. The santeria (a store that sells saints’ statues and devotional items) at the cathedral does not feature her images, though they are prominently featured at the santeria of the nearby Franciscan church. The government tourist office works to promote the site.

Maria Livia’s place in the devotion is interesting, insofar as she is set up as an intermediary for an intermediary. Volunteers at the site handing out holy cards with prayers referred to the fact that these were “blessed” by her during an apparition. Several interviewees made reference to powers that Maria Livia had been given, including the power to cure.

Pilgrims at the sanctuary

Though pilgrims can walk up to the sanctuary daily, Saturdays are the primary day for common prayer and pilgrimage. Maria Livia, the visionary, is normally present on Saturdays to pray the rosary with pilgrims and to make specific intercessory prayers on pilgrims’ behalf. On the Saturday when the sanctuary was visited for this research in 2015, Maria Livia was not there, and group Rosary recitation was canceled in deference to the feast of the Señor y Virgen del Milagro.5 Still, a steady flow of people came to visit the sanctuary from early morning onward. Some pilgrims made the 10-minute walk up from the parking lot, but many more came by shuttle bus. By 10 a.m., there were about 75 people in line to enter the tiny sanctuary, and about 100 people there at any given time.  People visited the sanctuary in silence, wrote and deposited prayers for Maria Livia to communicate to the Virgin, and hung rosary beads from tree branches around the property.

Atop a hill outside Salta, Argentina, is a sanctuary for the Virgen del Cerro, a recent but extremely popular unsanctioned apparition and devotion.

Normally, Maria Livia arrives at noon to pray the Rosary with the pilgrims, receive their written prayers to transmit in prayer to the Virgin, and even to lay hands on pilgrims who are brought to her. Sometimes, following the laying on of hands, pilgrims are said to faint into the hands of the volunteers standing with them. While such practices sound charismatic, Maria Livia is generally described as anything but charismatic in terms of her style.

The sanctuary has no obvious place or box for financial donations or ex votos, or any commercial activity — even the sale of the Rosary beads that hang from many branches along the property. One visitor said that the diocese has restricted donations to Maria Livia, as a way of insuring the integrity of the cult.

Blue-scarfed servidores, mostly young “servant” volunteers, help people find their way to and from shuttle buses, maintain the grounds, and enforce the quiet of the place. Every volunteer, even in the parking area, declined to be interviewed and suggested that the sanctuary’s website would be a good source for answers to any questions. It was possible to interview some visitors in the parking area before and after their visits.

Most spoke of it as a place where they found deep peace and a spiritual connection, and many were deeply emotional about the experience. A few were there for the first time, but many came repeatedly. One woman from Buenos Aires had been before and reported that she had fainted on a previous visit when Maria Livia laid hands on her in prayer. She felt at the time like she had floated or flown. She explained, “The woman [Maria Livia] has received the power to cure from the Virgin.” She added that she doesn’t know if she herself was among those cured, but she continues to come and believe. Another visitor said that she does not ask for anything in particular, because the Virgin already knows, so she asks the Virgin to heal all who need help.

These visitors found it especially relevant that the Virgin continued to appear in the contemporary world. Three women who had traveled from Buenos Aires said that the Virgin came the hilltop in Salta, rather than to Buenos Aires, because of the deep faith of the people of the region. Several mentioned that in its early manifestations, the church had tried to stop the devotion, but people went anyway. They were confident that they could trust the Virgin and Maria Livia directly, and that the church would catch up with them, especially as it saw the devotion that was so manifest here.

One visitor suggested, “The Church just needs time to look at this... [but] I don’t know why it’s taking so long.”

They spoke of hearing about healing miracles but didn’t know whether or not the Church had verified them. A number of people spoke of their trust in Maria Livia as an intermediary to the Virgin. Another was grateful for the quietude and sense of calm that was evident in Maria Livia and the sanctuary, and described the primary message as a call to simplicity and away from materialism and competitiveness.