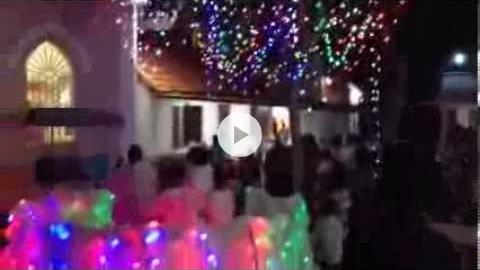 Veli and Thumba are Catholic villages in Kerala, along the coast of the Laccadive Sea, not far from the southern tip of India. Residents are proud of the fact that St. Francis Xavier preached in these coastal fishing villages in the 1540s and brought Latin rite Catholicism here. Any casual visitor would be immediately struck by the number of Catholic churches that are along the coastal road – one every kilometer or two – along with many shrines at the parishes, Catholic schools and some clinics. Most villagers are Latin rite, though Thumba also has Syro-Malabar and Syro-Malankara residents.

The towns are divided into small residential neighborhoods or units, each named after a saint. Though the local language is Malayalam, and signs for churches are almost exclusively in Malayalam, a number of the signs for these units are in English, a second language for many inhabitants. Catholics here tend to have names that combine English and Malayalam.

Veli is in some ways a traditional fishing village attached to the sea, but it is also deeply influenced by the contemporary world. In 1962, the Vikram Sarabhai Space Centre was established on land in Veli and Thumba. The towns are also not far from Thiruvananthapuram International Airport, a gateway to the rest of India and the Gulf States.

Fishing is still the mainstay of at least half of the inhabitants of both towns. Fishermen fish through the night a few kilometers offshore, and auction off that catch each morning. Even the wives of fishermen, who often sell the fish door to door or in markets, must purchase the fish through the auction.

As is true throughout Kerala, members of the community are connected into the outside world in important ways. A significant number of inhabitants emigrate for extended work assignments in places like Dubai, Singapore, Saudi Arabia, and Europe.1 Residents value their own way of life, but are also quite aware how people live in other cultures. One outcome of this global migration is a building boom. Houses are being expanded and belie far greater affluence than one would expect in a fishing village (space station workers generally live separately, on the station’s grounds). A good deal of the local prosperity is due to remittances from family members who are abroad or savings by those who have returned from abroad. The migrants keep and expand homes in India. Churches, likewise, are undergoing major upgrades. Three were being completely rebuilt in extravagant new white structures.

Most of the religious life in these towns takes place in the dark hours, before and after the heat of day. The early morning is punctuated not only by the sound of roosters, but also the sound of singing from various churches. Mass attendance is strong. A trip down the road on a single night saw a crowd gathered at one church for the feast of St. Anthony, a packed Mass at another parish, a vast yard of hundreds of parishioners at another church listening to novena preaching, and a line of people at the giant Christ the King statue in front of another.

Confession typically occurs about twice a year, before Christmas and Easter, according to townspeople. But believers express the greatest enthusiasm for the feasts that are important to the life of the parishes.

In these communities’ parishes, feasts are as important as anywhere else in India. Madre de Deus church in Vettucaud holds its major feast, the 10-day Christ the King pilgrimage in November. Videos on the church’s website show the remarkable scale and pageantry of the feast, while photos show the festival grounds in front of the church, processions of various groups to the statue of Christ the King, and the liturgy. The festival also holds an important social role, since seed-sellers come and set up booths near the beach to sells seeds for the farmers' annual planting.

The whole town celebrates Christmas by going to the sea. People head to the beach in the late afternoon of December 24 for swimming and outings in the fishermen’s  boats. In the evening there is typically a Mass from 11 p.m. through midnight, after which people dance until 3 or 4 a.m. to music provided by deejays on platforms set up in the streets.  By midmorning, people are back at the sea. What perhaps makes this most remarkable is that despite having beautiful sand beaches, this is the only time people use them for other than work purposes. But on Christmas, people of all ages will bathe in the sea.